The Citroën C3 WRC driver and navigator Julien Ingrassia duly confirmed their 46th career WRC victories on an event where their remarkable WRC careers started with a JWRC win back in 2008.

Leading by 27 seconds at the overnight halt, Ogier was never allowed to rest on his laurels by a hard-charging Ott Tänak and Elfyn Evans, both of whom were fighting for second place.

Championship leader Tänak was the star of the morning and the Toyota Yaris WRC driver claimed two stage wins to secure second place, but Ogier had a winning margin of 30.2 seconds. He also managed to whittle the Estonian’s advantage over him at the top of the Drivers’ Championship down from 16 to four points with five Power Stage bonus points. The win was also Citroën’s eighth in Mexico since 2004.

Ogier said: “It has always been special here since the start. I am so glad it is continuing this way. It was not an easy weekend for us and we came away with maximum points. I knew the feeling was good from the start of the season. Sweden was one weekend to let pass. Corsica will be the same target to win and claim maximum points again.”

Evans, steering the ship for the M-Sport Ford Rally Team after Teemu Suninen’s premature retirement on Friday, delivered an impressive performance in his Fiesta WRC to round off the podium places and earn vital points for the Blue Oval. He finished 19.7 seconds behind his Estonian rival after incurring a 10-second penalty for arriving late for the last stage.

Too far adrift to challenge for the podium after a miserable start to the event, Thierry Neuville had to settle for fourth overall and lost his second place in the championship to Ogier. His result was the only high point in a miserable event for the Hyundai Shell Mobis World Rally Team, which saw both early leader Andreas Mikkelsen and Dani Sordo – who had been up to second – pushed out of contention after problems on Friday. The Norwegian and the Spaniard finished the rally in 11th and ninth overall, respectively.

Toyota’s Kris Meeke led outright for one stage on Saturday morning, before a puncture, suspension damage and then a gearbox issue cost him any chance of challenging for the podium. The Ulsterman conserved his tyres on the first two stages of the final day in an attempt to win the Power Stage. He was rewarded with second on the special, four bonus points and an eventual fifth overall.

Mexican Benito Guerra delighted the home crowds by equalling his best ever finishing position of sixth overall at his home event. On this occasion the Škoda Fabia R5 driver achieved the success in a WRC 2 car, however, and maximum points in the WRC’s secondary category were an added bonus for the México City man. His winning margin was 3min 16sec.

Guerra said: “It’s a great result. The best result ever and my first victory in WRC 2. I have been fighting for this win for two years. I am so happy that my first time is in México!”

Finland’s Jari-Matti Latvala suffered alternator woes on Friday evening that dropped his Toyota Yaris WRC out of contention, but the veteran of 198 WRC rallies fought back strongly to try and displace Bolivian youngster Marco Bulacia on the final morning to claim eighth place, despite a late radiator scare.

Eighteen-year-old Bulacia belied his lack of experience to finish second in WRC 2 behind team-mate Guerra and in an impressive seventh overall. Mexican driver Ricardo Triviño was classified in 10th place in his Škoda Fabia R5.

Poland’s Lukasz Pieniazek bounced back from his Friday retirement to reach the finish of his first event outside Europe in 12th overall. The result enabled the unchallenged Ford Fiesta R5 driver to claim much-needed maximum points in the WRC 2 Pro category, as he looked to close to gap on series leader Gus Greensmith.

“The kilometres are the most important,” said the Pole. “I am happy that we are here at the finish. It was an amazing experience. I will be more confident next time on these stages that are very demanding.”

Esapekka Lappi was given the unenviable task of kick-starting the final morning and the Finn laid down the lines to follow in the 24.38km of the Alfaro stage and posted the target time of 14min 12.7sec. Latvala was the fastest of the first group on the special with a time of 14min 00.4sec in his bid to chase down Bulacia and snatch seventh overall away from the Bolivian.

Meeke cruised through the special to conserve his tyres for a push on the final Power Stage, but Tänak was on a charge and he managed to sneak ahead of Evans and snatch second overall with a flying time of 13min 52.6sec, despite opting to run harder compound tyres that should have given him a disadvantage in the cooler temperatures of the morning stage. He beat the Welshman by 4.2 seconds to move two seconds ahead.

Ogier only dropped 0.9sec to the Estonian and retained a lead of 28.3 seconds. Both Guerra and Pieniazek safely negotiated the special to remain firmly on course for wins in their respective WRC 2 and WRC 2 Pro categories.

The new Mesa Cuata special of 25.07km was next on the agenda, the test made up of around 18km of the El Chocolate stage that had been used twice on Friday and a new track section at the end.

Tänak delivered a crushing performance to set a time of 19min 18.8sec to beat Evans by 5.2 seconds and take an advantage of 7.2 seconds over the Welshman into the final Power Stage at Las Minas. Ogier consolidated his advantage with the second quickest time to lead by 24.4 seconds heading to SS21.

A committed Esapekka Lappi set the target time of 6min 35.439sec in the Power Stage and Mikkelsen fell 1.6 seconds short of the Finn’s opener. Sordo was 0.119 seconds faster than Lappi to hold the provisional lead with six cars to run.

Latvala began the stage without the front bumper assembly on the Yaris and the Finn struggled to the finish with a time of 6min 56.6sec. He had damaged the sump guard and the radiator in Alfaro, made temporary repairs to the radiator to stop further leaks and taken water from a local river just to reach the finish.

Meeke ‘threw the kitchen sink’ at the stage and was rewarded with the fastest time of 6min 30.508sec but Neuville narrowly missed out with the second quickest time thus far, despite worn tyres.

It was left to the big three to try and prevent Meeke from taking the five bonus points. Evans picked up a 10-second penalty for clocking into the stage late, rued his tyre choice and was off the pace for the stage win after running wide at one point.

Tänak confirmed second overall with a subdued drive, but Ogier pushed hard for the bonus points and a time of 6min 30.483sec was enough to snatch five crucial points and demote Meeke to second on the special by just 0.025 seconds! 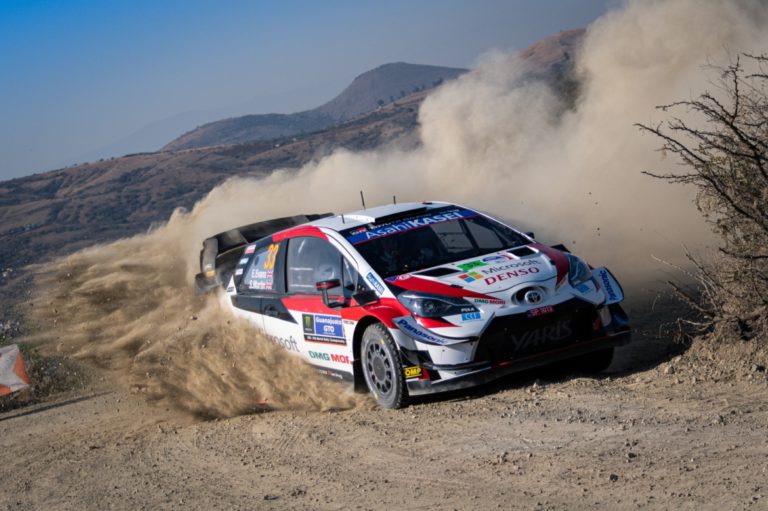 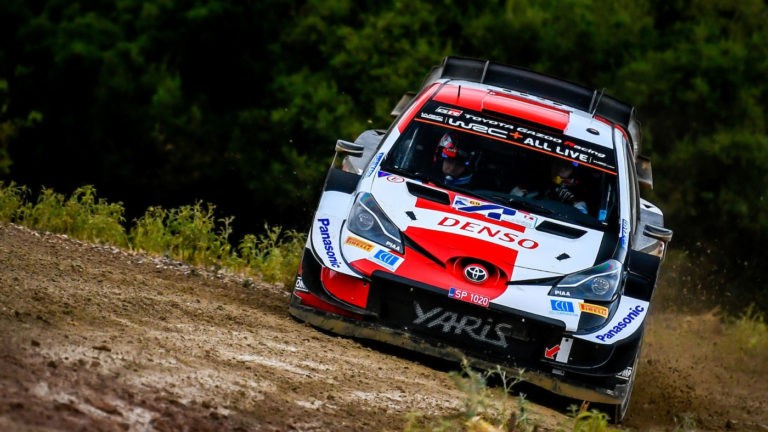