LEÓN (México): M-Sport Ford World Rally Team’s Sébastien Ogier snatched the outright lead in dramatic circumstances in Rally Guanajuato México on the Guanajuatito stage and held that advantage to the end of the day to take an outright advantage of 35.9 seconds into the final morning.

The defending five-time World Champion won four successive gravel special stages and stands on the verge of a fourth victory in México and his first with a Ford Fiesta WRC. If he is successful on Sunday, it will mark the Blue Oval’s first win here since Estonian Markko Martin won on the event’s debut in the WRC back in 2004 at the wheel of a Ford Focus WRC 03.

Ogier said: “It has been a perfect day to be honest. We can be very happy with that. I pushed as hard as I could.”

M-Sport Ford World Rally Team’s Malcolm Wilson added: I think the word extraordinary puts into perspective what Seb has actually been this afternoon. I could sense a glint in his eye at lunchtime that he was really going to go out there and try and attack. He did and has the lead. It was an incredible afternoon. It was just Sébastien at his best.”

Nine-time World Champion Sébastien Loeb led after the morning’s loop of three gravel stages on the varied tracks in the hilly areas around León and Guanajuato, but the Frenchman picked up a surprise puncture on the racing line and was forced to stop and change the wheel in SS14. The delay cost the Citroën Total Abu Dhabi World Rally Team driver well over two minutes and he slipped to fifth, a position he held at the overnight halt.

Dani Sordo of the Hyundai Shell Mobis World Rally Team had been the overnight leader, before ceding that advantage to Loeb in the first stage of the day, and the Spaniard also collected a front puncture in the decisive 14th stage. He drove to the finish on the flailing rubber and fell behind Loeb’s team-mate Kris Meeke and into third place. The pair were separated by just 10.9 seconds at the end of the day in the frantic battle for second place.

Hyundai’s Andreas Mikkelsen was the main beneficiary of Loeb’s woes and the Norwegian held a comfortable fourth at the night halt.  His championship-leading team-mate Thierry Neuville lost further time because of his road position and was classified in sixth, but it could have been a lot worse for the Belgian after two adverse starting positions and more than one collision with banking on the stages.

Pontus Tidemand has completely dominated the WRC 2 category in his Škoda Fabia R5 and the Swede reached the night halt a staggering 5min 42.6sec ahead of Ford’s Gus Greensmith, who continues to be pressurised for his eighth place by a determined Finn Jari-Matti Latvala, who restarted under Rally2 after alternator issues on Friday. Latvala was just 52.8 seconds behind at the end of the day.

México’s Ricardo Trivino failed to start the second loop of Saturday’s timed tests and that opened the door for Francisco Name to fly the local flag in 15th overall before the last two stages.

Chile’s Pedro Heller and Bolivian rookie Marquito Bulacia held third and fourth in WRC 2 after SS18, while Great Britain’s Tom Williams was still running well on his Mexican debut near the rear of the field in the sole WRC 3 Ford Fiesta.

Only Elfyn Evans missed out on the third leg, as a disgruntled Neuville suffered the ignominy of opening the road for the second day. To compound matters for the WRC leader, he stopped for around 50 seconds after a watersplash in the opening 30.97km Guanajuatito stage and then ceded further time with a slow puncture en route to a stage time of 22min 39.3sec.

There was more drama to come: Ott Tänäk completed the special at a snail’s pace, complained that he only had around 20 horse power from the Yaris’s engine and tumbled from third to sixth position with the loss of 2min 50sec. Ogier moved to within 1.1 seconds of fourth-placed Meeke and appeared to have won the stage until a flying Loeb delivered a brutal sucker punch to Sordo with a stage time of 20min 35.6sec that gave him an outright lead of 5.1 seconds on a dramatic opening stage. Tidemand extended his WRC 2 lead over Greensmith to 3min 49.9sec.

The 26.37km of Otates followed a refuelling stop, but Tänäk’s engine woes forced the Estonian out of the rally on the road section and his demise promoted Neuville to sixth place. Meeke attacked on the twisty and technical special and the fastest time moved the Ulsterman to within 15.6 seconds of leader Loeb, who extended his advantage over Sordo to six seconds.

Tänäk said: “It was looking good. I felt comfortable from the start. Seven kilometres from the end of the stage we lost all the drive and the turbo had failed. That’s the way it is. I guess we were able to be competitive on my first event with the team on gravel. We had issues yesterday and still managed to be close to the first place, so there are some positives.”

The El Brinco test acted as the final Power Stage in 2017 and will go down in WRC folklore as the special where Meeke visited a spectator car park on his way to victory. Ogier attacked on the fast tracks and the quickest time moved him into an exact tie with Meeke for third place. Sordo was also on the offensive and the Spaniard reduced Loeb’s lead to just 2.9 seconds before the lunch halt.

A composed Tidemand reached the midday service with a massive lead of 4min 18sec over Greensmith in WRC2. Heller was third, but Bulacia lost further time in El Brinco with suspension damage.

Guanajuatito was re-run in the heat of the afternoon and the abrasive gravel turned the rally leader board on its head. Loeb stopped to change a front puncture and the delay cost him 2min 23sec to a flying stage winner Ogier. Sordo also collected a flat tyre after striking a small stone and the tyre began to fall apart towards the end of the stage. As Loeb fell behiind Mikkelsen and into fifth place, Sordo slipped to third and Ogier inherited a 3.8-second advantage over Meeke.

Ogier was again quickest through Otates 2 and, when Meeke spun and had to drive back through his own dust with the loss of 30 seconds, the Ulsterman conceded that the battle for the win was over. He trailed Ogier by 34.5 seconds and held a reduced advantage over Sordo of 7.3 seconds, after both Sordo and Loeb eased their pace to finish the special without a spare tyre in the car.

The faster tracks of El Brinco preceded two further special stages at the León Autodrome. Temperatures were hovering around 30°C. Ogier has always run well on this stage and the Frenchman extended his overall lead to 37.1 seconds with a fourth successive fastest time. Meeke retained second after beating a cautious Sordo by a mere one tenth of a second.

Tidemand’s WRC 2 stroll continued and his lead over Greensmith grew to 5min 36.9sec, although the Briton had been testing soft compound tyres on the afternoon’s loop of stages.

A large crowd gathered for the two stages at the Autodrome, where Loeb faced off against Ogier and the French duo shared a personal win apiece. The battle between Meeke and Sordo for second overall saw them share the outright fastest time in SS17 and the Ulsterman was three-tenths quicker in SS18 to increase his advantage to 7.7 seconds.

Ogier headed for service and on to the last León street stage with a lead of 35.2 seconds and the second fastest time ensured he remained comfortable at the end of the day. Mikkelsen claimed his first stage win but Sordo stalled on the startline and dropped a further 3.2 seconds to Meeke.

Crews will tackle just three stages on the final morning and a mere 46.46km of competition. Action starts with the 24.32km of Alfaro and a double run through the television Las Minas special brings the action to a close. The test only runs for 11.07km and the second pass acts as the event’s Power Stage with five valuable championship points available to the winner. 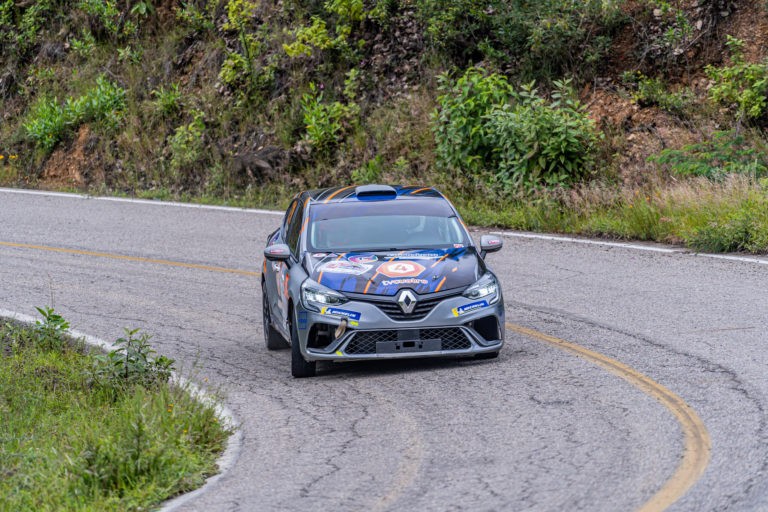 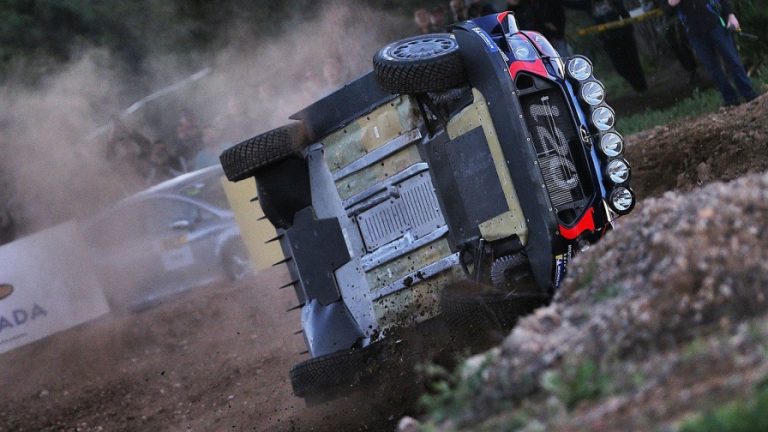 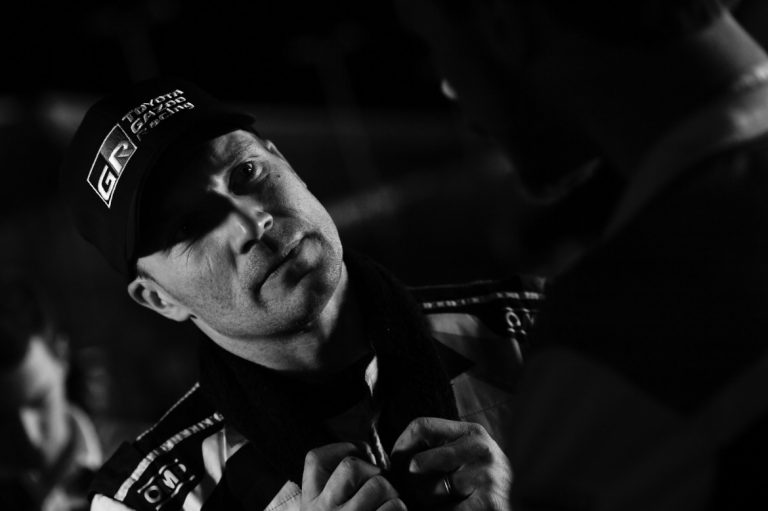 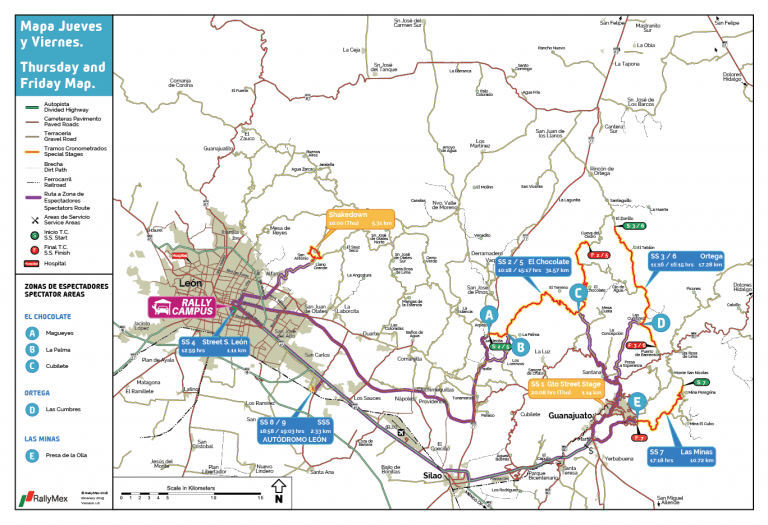